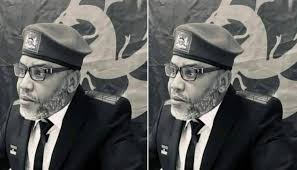 Mazi Nnamdi Kanu during his LIVE broadcast, Sunday directs all Biafrans to boycott Facebook and Join Signal the New Matewit social Network following the New Facebook/Whatsapp policy.
Recall that whatsapp has a New policy which says: User Data on whatsapp/Facebook would be shared publicly come February.

As reported by Many News outlets, “WhatsApp users must agree to share their personal information with Facebook and its wider empire if they want to continue using the messaging service from next month, according to its terms and conditions.”

American Editor, Mike Butcher reacting to the new WhatsApp policy, wrote: “WhatsApp will share its users’ personal information, including phone numbers, IP addresses, contacts, & more with Facebook from Feb. 8, according to the new T&Cs. No opt-out. The only way to object is to leave the service & move to a service like Signal or Telegram.”

Kanu added that he would stop using WhatsApp and Facebook orders Biafrans to do so, so they can stay connected to his broadcasts.

In conclusion he said he next brodcast will be on MATETWIT