Oladapo Daniel Oyebanjo, also known as Dbanj in Nigeria, has contacted Davido to express his condolences for the loss of his son Ifeanyi Adeleke.

The Site News reports that the singer who also lost his 13-month-old child to a drowning accident in his home in Ikoyi, Lagos State took to his Instagram page to celebrate and console Davido.

He noted that Davido’s 30th birthday may be a difficult one but prayed for long life, strength, wisdom, and grace upon him.

Dbanj also advised Davido never to forget everything they had discussed adding he should trust God and know that his restoration is certain.

He wrote: “Happy Birthday To You My Brother @davido. I know that this birthday may be a difficult one for you but I pray for long life in Strength, Wisdom and Grace

“Don’t forget like we discussed, Trust God and pls Know Your RESTORATION Is CERTAIN . AMEN”

He expressed optimism that the Nigerian singer, and his fiancee, would be having triplets as a replacement for their son, Ifeanyi.

Cubana Chiefpriest took to his Instagram page to share moments from the Sunday service of Celebrity pastor, Tobi Adegboyega.

In the video, the clergyman and his music ministers honoured Davido with a remix of his song titled ‘Stand Strong’.

The song is no doubt a means to console the lovebirds who are going through hard times following the death of their son.

The celebrity Barman noted that God will fix everything about Davido and Chioma because He is their only backup.

He affirmed that triplets are sure and God will make it happen. 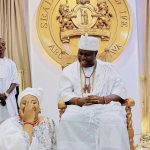