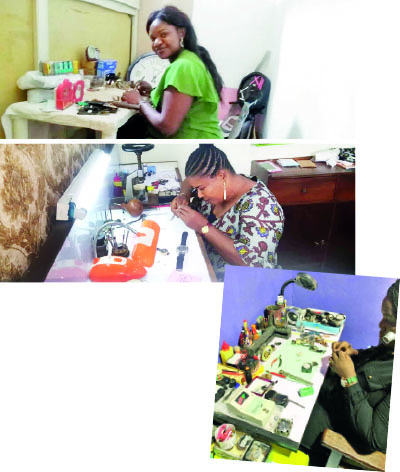 This post by Sun News explores the world of confident, self-driven women horologists.

There is little doubt that watch-repairing business is predominantly a man’s work. It is not even a job that excites most Nigerian youths nowadays. Simply put, it is a handiwork perceived to be for slow and retiring old men.

Therefore, in a society that thrives on such stereotype, imagining a woman delving into the highly technical craft of horology could seem as incredible as an egg cracking a palmnut.

The exploits of these three women watch repairers are compelling. They are not only flourishing in the male-dominated handiwork, but are also training and empowering women and youths to earn a living repairing watches and clocks.

During a chat with Sunday Sun, these bold women narrated how they summoned courage to go into the intricate business of repairing wristwatches, the ups and downs, plus how they handle gender discriminations for doing a ‘man’s work’.

“Many thought that I wouldn’t succeed as a woman horologists,” Ms. Shita-bey told Sunday Sun.

For her, the interest in repairing wristwatches all started as a child when she desired to follow in her father’s footsteps to become a horologist. Hence, when she clocked 18, she was already mentally ready to fully launch into learning the craft.

She said when she started her company, Saxine Horological Service, Lagos, she faced huge discouragement from people that doubted her skill and strength as a woman to succeed her father.

But today, her company is making waves in the trade in Surulere and beyond.  “I’m the only one among my siblings and relations that developed keen interest in our daddy’s work.

“I believe that God led me into it. My late dad, Kadiri Sulaiman Shitta-bey, trained as a horologist in France. From there, he came back to Nigeria to set up his business. As a child, whenever I went to my father’s shop, I loved his keenness while working on the wristwatches, and how his customers’ smiles and happy they were when they collect their repaired timepieces. I saw him as a superhero horologist, and also loved his sincerity.

“When I told my father that I was interested in learning the craft, he was happy, and encouraged me. So, in 1985, when I clocked 18 years old, my father began to train me. I learned for about six months, and then went to Yaba School of Technology for additional training in Horology from 1985 to 1986.

“After that, I came back again to my dad’s shop and continued learning the craft. When people saw how serious I was, they kept discouraging me, telling me that horology was a very hard skill for a woman to learn. And that it is a man’s job. But I kept telling them that I’ll give my best,” she explained.

Today, Ms. Shitta-bey is proud that she paid no heed to the naysayers that judged her competence because of her gender.

“Repairing watches is a very rewarding skill. Being a single mother, I single-handedly trained my two children up to university level with the proceeds from my craft. So, I have done well for myself, for my family, and I have touched lives, and still touching lives positively.

“I work twice harder to stand out from others, especially male horologists by ensuring that my workshop is well exposed, and that the setting is neat enough. I set up my business to be different from roadside watch repairers. Also, because of the caliber of clients I have, I make sure my shop is organised. Most of my clients are government officials, professors from Lagos University Teaching Hospital (LUTH) and even University of Lagos (UNILAG); they do come here to repair their watches. So, for people like that to come here, I have to make my shop to be presentable so that they can sit, relax and be rest assured that their wristwatches are in safe hands. Also, I have customers from all over the world.

“The Coronavirus affected my business, otherwise, my clients based abroad bring their wristwatches for me to repair. They contact me on WhatsApp, to book appointments with me. They trust and have confidence in me,” she said.

And just like she learnt from her father, 35-year-ago, Ms. Shitta-bey said that her biggest satisfaction repairing watches is to make people happy.

“When I repair or service a watch, I dismantle it to find out the fault with the timepiece. After checking, replacing it with another part, or repairing the fault, I service the watch and clean the components one by one so that it doesn’t rust. So, when I repair watches, and my customers are pleased with the job I’ve done, I get satisfied. That’s my joy because I don’t like it when I work, and after a week or few months, they start complaining; I don’t like that at all,” she said, adding that sometimes, “some clients fear that I might damage their wristwatches.”

Another woman horologist that learnt the skill from her father is Mrs Olufunmilola Olaniyi and her siblings.

According to Mrs Olaniyi, her father –  Safiriyu Olasupo Odeniye – had six children, out of which three decided to embrace their father’s line of work.

Presently, she and her siblings have all established horological shops in different parts of the country. “Our father was known in the area as ‘Baba Alago’. Understudying him while we grew up was very interesting. It all came naturally. As a child, you are sent on errands. He could just say ‘hey, give me the long nose plier, give me the picker, give me the testing board, give me the telescope. Before you know it, you get used to all the tools and their uses. Sometimes, he would ask us to attend to some customers when he was very occupied with work. He would say ‘check that watch, check the battery.’ Before I knew it, I became perfect, and began to fix wristwatches for customers.

“It was so much fun because I unconsciously learned the craft from my father. And when he was alive, he got the business registered. So, we did not worry much in that regard. We simply continued from where he stopped. And till date, we have been using the same brand name, S.O.O.S Horology Nigeria Limited to run the business. SOOS stands for Safiriyu Olasupo Odeniye and Sons Nigeria Limited. So far, we have six branches running presently in Lagos, Abesan Estate Retail Market, Iyana Iyesi, Ota Ogun State, Egbeda, Baruwa, Ipaja, Lafenwa, Ogun State and one at Bwari area in Abuja, FCT,” she said.

As a woman doing ‘men’s work’, Mrs Olaniyi, said she gets looked down upon by first-time clients that come to her shop. “I have experienced discrimination a lot of times. Most times, first-time customers walk into my shop expecting to see a man, and seeing that I am a woman, they get discouraged to allow me to repair their watch. So I’ll just tell them to give me a chance, and most times they’ll just say, ‘Ok, but Madam if you spoil my watch, I will collect my money back.’ I smile, because I always prove them wrong. Sometimes I strike a bet with them to pay me double if I prove my skill to them, and return their watch to perfect order.”

‘I dumped banking for horology-’ Oke

Mrs Oluwatosin Oke is the owner and head-horologists of Lady Watchrepairs, Ikeja, Lagos. Her venture and success in horology is another inspiring story of courage, focus and resilience. She quit a well-paying banking job to move into the dicey terrain of entrepreneurship. Mrs Oke came with the hope to only sell wristwatches. But along the line, fate steered her into repairing them.

“I never knew I would start repairing watches as a source of livelihood. I had no knowledge of watches back then; I was only fascinated by the beauty.

“I started in 2010, when I felt working at the bank was becoming too tedious. I worked at the head office, in the international banking department of a popular bank on Marina, Lagos. I left very early in the morning, and returned very late at night. So, I kept telling myself that I couldn’t keep living like that, and that I needed to think of something else to do with my life. When I got married, I had complications in my pregnancy. So, the doctor suggested that I should take things easy. He urged me to choose between my home, and my banking job.

“It was at that point that I decided to start up my own business. I aspired to start selling wristwatches, so my husband introduced me to a watch supplier from Hong Kong. When I started selling, I wasn’t making much profit because some of the watches that were supplied to me were faulty and broken. So, I needed to pay repairers to fix the watches before I could sell them. Because of this increase in cost, I was running at a loss.

“I got tired, and went back to paid employment again. I secured a job at a food company as their general manager. But again, I wasn’t satisfied. I desired to be free, and to be my own boss. So, in 2011, I went back to selling watches again. But this time, I decided to go and learn how to repair watches.

“I went and started as an apprentice at Ikotun garage. Many people were uncomfortable about that, even the old man that trained me was uneasy. He kept saying that I am a woman, and he’s not sure that I could cope. He said that I’ll learn for two years, but after barely seven months, I leant and perfected in repairing watches. That’s how I started repairing watches. And I thank God that I’ve been having good feedback ever since I started my company, LadyWatch Repairers,” she told Sunday Sun.

According to Mrs Oke, watch repairing is more than what people see at the roadsides. It is an intensive work that requires passion and keen concentration on the little parts.

“Watch repairs has a lot to do with passion. If you get skill in repairing watches, you can never go broke. It’s a skill that comes with long term benefits that would carry you all the way. I have a connection with watches, so when I start repairing, I forget everything. Sometimes I repair watches from 9:00p.m till 6:00a.m if I have so much work. I make sure everything is in order so that the customer doesn’t complain.” 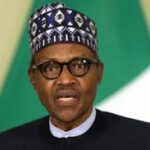 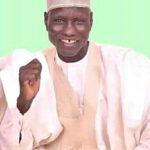