A lady identified as Evelyn Dodo has been remanded by a magistrate court in Rumuepirikom community in Obio Akpor Local Government Area of Rivers State for alleged theft.

The suspect was said to have stolen weavons worth about Seven Hundred Thousand Naira from a hair shop in Diobu area of Port Harcourt.

According to the charge read in court, the suspect who had succeeded in the first operation was caught in her second attemp to steal more items.

Dodo hails from and resides in Delta State.

The court adjourned to 11th, 12th and 17th of August, 2021 for mention and possible bail application of the suspect.

In a related development, One Vivian Onuju and her son Best Onuju have been arraigned before a Magistrate Court sitting in Choba Community in Obio-Akpor Local Government Area of Rivers State on a three count of assault, inflicting of injuries on a police officer and disturbance of public peace.

On count one and three, Vivian is alleged to have inflicted harm on one Constance Omerunna and acted in a manner that could disturb the public within the premises of a police station in Rumuolumeni community on 1st of August, 2021.

In count two and three, Best Onuju is alleged to have inflicted injuries on a police officer who came to effect arrest on his father in their apartment within the area and acted in a manner capable of bridging public peace on the same date.

While the court granted bail to Vivian, in the tune of N300, 000, Best was remanded till the next adjourned date, August 5 for bail consideration. 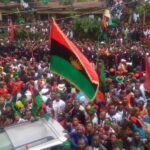