A civil rights group, the Save Lagos Group (SLG) has declared one
acclaimed Lagos Lawyer, Mr. Okwudili Alagbu as lawless Legal
Practitioner, saying his character was unbecoming of a lawyer in the
country because his behaviour had not different from that of tout in
the Motor park.

The civil group stated this against the recent attacked of a Lagos
based banker, Miss Omolabake Olaitan Oyelami with phone number 🙁
+2348023862294) by Mr. Alagbu who claimed to be a legal practitioner
in the State and also a landlord of a residential building located at
N0. 30, S-Close, 23-Road, Festac Town where Miss Oyelami was the
tenant of Alagbu until after the expiration of the quit notice being
given to her till the Thursday 20th of May, 2021, adding that instead
Alagbu to allow Miss Oyelami who was parking out the building leave
the place peacefully, she was violently attacked by Alagbu.

But it was revealed that the attack on the person of Oyelami was as a
result of exposing Alagbu by dragging Alagbu before the Legal
Regulatory Disciplinary Committee over misconduct which against the
decent conduct of a legal practitioner.

It was earlier reported that Alagbu (+2348023334432) along with his
wife, Celestial Chinelo Alagbu (+2348036156039) and their Children had
nearly snuffed life from her, with no offence than being their tenant
and banker, adding that Miss Oyelami was parking out of the apartment
she occupied in the Alagbu’s house penultimate Thursday but Alagbu was
not happy that he could not fulfill their evil plan on her again.

When she was going out with the loaded vehicle of her belongings,
Alagbu, his wife and family members stopped the moving vehicle parking
her loads out of the house by starting fomenting trouble with her, the
information also had it that they went to the extent of causing her
by threatening her life that they would make sure they knew her new
house and they are going to kill her one day there.

It added that they disallowed the loading vehicle from moving out of
the residential building until intervention of Woman Inspector and
Investigation Police Officer (IPO), Caroline (+2348030441834) attached
to Festac Divisional Police Station before they could allow the
vehicle to move out of the compound.

It would be recalled that Alagbu had earlier being dragged before the
Legal Practitioner
Regulatory Committee, President Nigeria Bar Association
(NBA),Inspector General of Police (IGP), Lagos State Commissioner of
Police, President Nigeria Bar Association (NBA), National Human Rights
Commission (NHRC) and host of others for necessary action by the Save
Lagos Group on behalf of Oyelami.

The Convener of the Save Lagos Group (SLG), Comrade Adeniyi Alimi
Sulaiman on Monday, has urged appropriate security agents in the
country, especially in Lagos state, to save the lives of the innocent
Miss Oyelami from the hand of lawless Alagbu.

Meanwhile the group, had also concluded arrangement to drag one Mr.
Mutairu Cole (+234 9058058850) before Legal Practitioner Committee and
Nigeria Bar Association (NBA) Disciplinary Committee for colliding
with one Favour Idigo(+2348033353153) collaboration with 2/ic (+234
7033651137),Ogombo Divisional Police Station in Ajah area of the
State, to violently attacked the Emerald Housing Estate in Ajah area
of the State over tenancy matter between Favour Idigo and one Madam
Yusuf until the Security at the gate if the popular Estate resisted
their illegal action.

The group stated that the Petition Letter had been forwarded to the
appropriate quarters for notification and necessary action on the
matter against Mr. Cole, 2/ic Ogombo Divisionla Police Station and
their co-travelers. 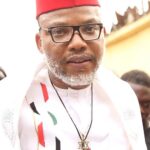